If you are into camping, biking, hiking, the beach, history and the great outdoors, you should check out Fort Worden State Park. It is just a short drive and ferry trip away from Seattle and worth a visit! This was our destination for our very first camper trip and we had such a great time we went back almost exactly one year later. Fort Worden has tons of trails for biking and hiking, there are houses and cabins for those that don’t want to camp and lots of community rooms and activities, they even have a yoga studio on the grounds.

We have some great friends that live in Port Townsend, so when we are there we get to visit them too, which makes the trip even more fun. This past weekend, we were able to host dinner one night at our camper and the second night we got to go indoors for dinner at their house.

Saturday was a full day, while my friend and I popped into a yoga class in Port Townsend, Andrew and the girls biked down to the beach. Then we all made a visit to an awesome pumpkin patch in Sequim, we got some great pumpkins, ate some yummy kettle corn and the kids got to get lost in the corn maze. Sunday morning we took our time heading out and took another long bike ride to see all the forts on the hill and then back down to the beach again. Lots of fun, enjoying the rare October sun and the beautiful outdoors, before we had to head back to reality.

Everyone always asks if we ever stay home? My answer: Not if we can help it! Too much responsibility all week long, the weekends are for fun and we are on a mission to find it where ever we can! 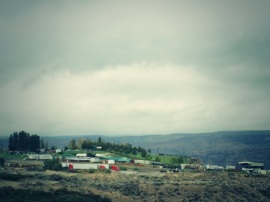 View of the theater from our camp site

Way back in the spring my husband and I were listening to the radio and heard an ad for Maroon 5 & Kelly Clarkson coming to The Gorge Amphitheater in September. The girls love their music, we figured it would be a fun, family concert and The Gorge is an awesome venue to see any show. We knew in late September it might be a little cold but it will be okay. We planned to go over in the camper, spend the weekend and have a great time rockin’ out.

Well, the weather had other plans for us.

We headed to Eastern Washington on Friday night after school, the weather was fine as we drove over, even nice enough for us to have a glass of wine outside before going to bed Friday night. When we woke up on Saturday morning, the crowds were coming in for the show, the Terrace Camping area was filling up and people were getting excited. Our family passed the time by playing cards, frisbee, a little volleyball and walking around checking out the area.

Hanging out before we head to the show.

By 5pm, the concert doors were getting ready to open and we were ready for the show. At this time it was pretty windy, in fact the wind was pretty strong all afternoon, blowing people’s tents and canopies all over the place. We had an early dinner and packed up all our blankets, extra hats, gloves, tarps, etc. Making sure we were prepared for whatever weather we encountered, we were going to make it through that concert!

But the weather and the show producers had other ideas. After the opening band, Rozzi Crane performed, there was a bit of slow down in action. People kept moving back and forth on the stage moving equipment, for what we thought was for the next act. But in reality it was being taken down. We started to see crowds of people leave the amphitheater, as we huddled under our blue tarp, staying dry from the rain that was now blowing sideways, I would not leave until I heard that the show was officially cancelled. And then, our friend Adam Levine came out and told the crowd “This sucks guys!” … yes it does Adam! And then running in from off stage is Kelly Clarkson, “I had to run over here from my bus, sorry guys we have to cancel”. LAME! That is what we all said. We get it the wind was blowing sideways, there was huge metal scaffolding on the stage that these performers were going to have to spend the next few hours under in the wind and rain. If anything fell, they would be dead. We get it, Safety First.

Pop-star Nadia waiting for the show to start

But I must say we were a little more than disappointed. Poor Nadia, who desperately wants to be a pop-star when she grows up, really wanted to get some pointers from KC on stage. I will give props to Ticketmaster, they are refunding everyone’s tickets and even our camping. And I didn’t have to make one phone call, we got an email and it will be back on our credit card. In the end, we basically got a free weekend of camping. I was secretly hoping that Maroon 5 was going to pop over to the Terrace Camping for some coffee and donuts on Sunday morning and do a few acoustic songs… no such luck… a girl can dream!  So, until next time, we will remember maybe no concerts at The Gorge after Labor Day and we will have to wait and see Maroon 5 indoors next time they come to town. 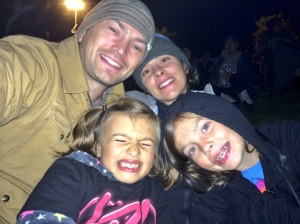 Huddled together, still having fun, even without a show

Yoga is for Every Body

The ultimate guide for independent travellers seeking inspiration, advice and adventures beyond their wildest dreams

The Feed Zone
The Vino Diaries

Not a "how to be a great parent" blog

Nourishment for Body and Mind

A site focused on bringing attention to issues and topics that are interesting, important and worth sharing.